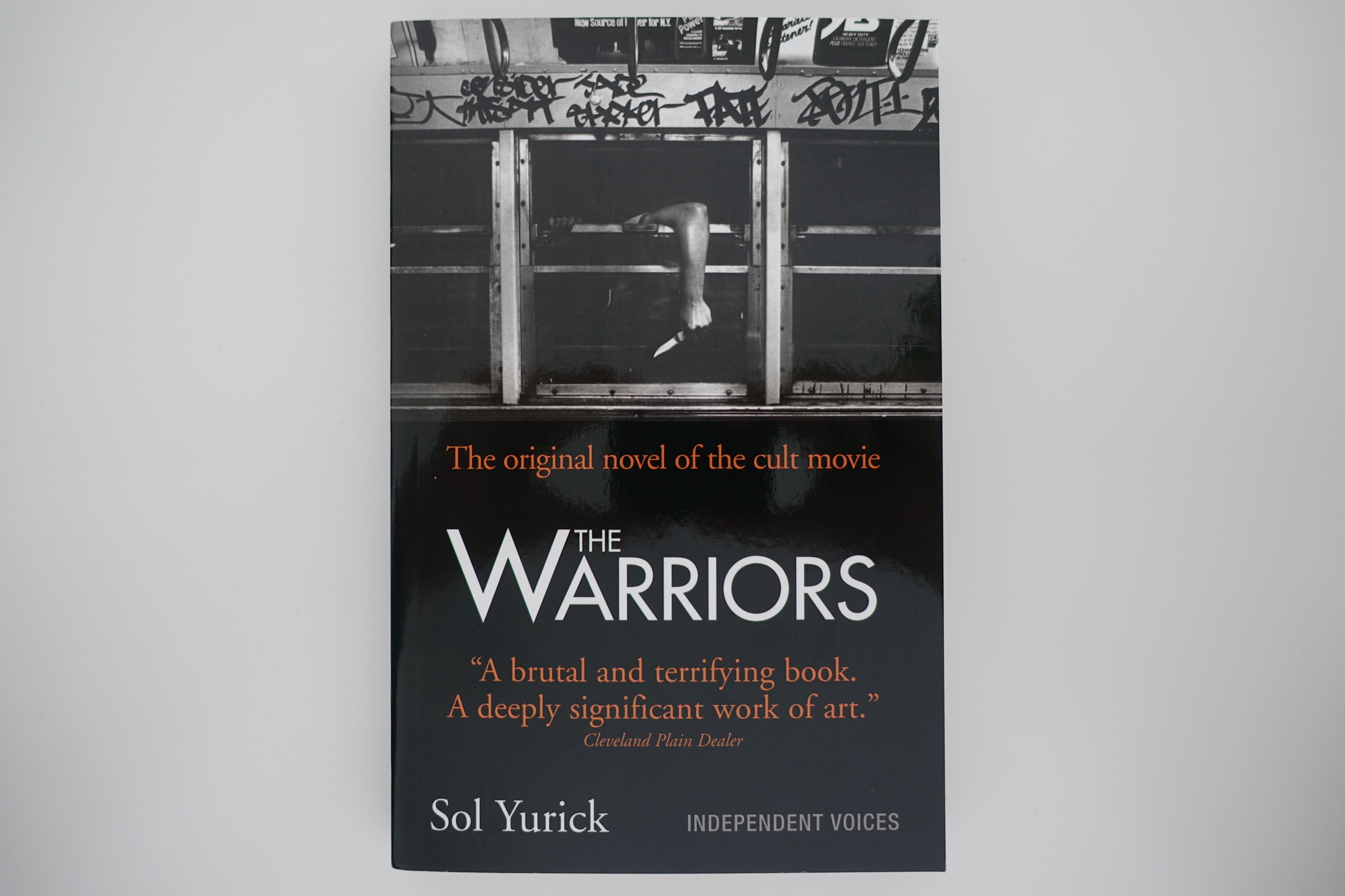 If you have never read The Warriors by Sol Yurick, do it. You will be rewarded with a new perspective of The Warriors movie the next time you watch it and will be surprised about how many things you didn’t notice in the movie that are featured in the book. However, I’ll come to those in just a moment.

Despite launching this site over twelve years ago, I only finished reading the novel by Sol Yurick today! I did try reading the book when I launched the site but couldn’t get into it as the names of the characters and gangs did not match those in the movie and the story didn’t closely follow the one depicted in the film version. That said, I am really glad that I finally read the book as I can now appreciate Yurick’s vision and why he was never really happy with the way the movie portrayed his book.

The movie is only very loosely based on the book and adds a great deal of things that were not included in the book, such as the fights with all the different gangs of the city. In fact, after the meeting in the Bronx, only the run-in with the Orphans has a parallel in the book (except they are a Puerto Rican gang called the Borinquen Blazers). That’s right, no Rogues, Furies, Punks, Lizzies or the crazed Luther! In the book the cops are the biggest barrier the gang faces getting back to Coney.

The essence of the story is the same as the book in that it follows a group of seven gang members from the Coney Island Dominators on their way up to Van Cortlandt Park for a meeting called by Ismael Rivera of the Delancey Thrones. The gang members attending the conclave get restless, start fighting, and someone shoots Ismael causing everyone to flee. The novel follows the Dominators in their struggle to get home but gives a large focus on one gang member in particular, Hinton, who is similar to the character of Rembrandt in the movie.

However, unlike the movie, the Dominators never get framed for the murder and are simply battling and struggling to make their way home through enemy territory which is full of cops. What’s more, the book is very dark and very gritty and the Dominators rape and kill on their way back home to Coney which is in stark contrast to The Warriors featured in the movie (even though there are some subtle references to this). The character of Ajax in the movie is the equivalent of Lunkface in the book and is perhaps the character that most resembles their literary counterpart.

If you have never read The Warriors by Sol Yurick and are a big fan of the movie, I wholeheartedly suggest that you give it a read. At less than 200 pages it is a short book and won’t take long to get through. My advice is that you don’t think too hard about connecting the book to the movie and enjoy it for what it is. However, I said at the start of this review that if you love The Warriors movie then reading Sol Yurick’s book will reward you with a whole new perspective and that you will be surprised at the number of things that you never noticed in the movie that form part of the story in the book. Let me give you some examples:

In the book The Dominators hide out in the graveyard after escaping the conclave just like The Warriors, but in the book many of them are scared about being in the graveyard and worry about the ground opening them up around them or that they will be attacked by ghosts. In the movie, Rembrandt exclaims that “this is a graveyard” after Swan tells him to look around to check that they are ok – a nod to this part of the book that you won’t look at in the same way again!

In another pivotal part of the book, one of the characters gets separated from the rest of the gang and finds himself in the subway playing the Sheriff shooting duel arcade game determined to beat it to prove how strong he is and to show that he can fight just as good as the other members of his street family. In the movie, the Sheriff game can be seen in the background in one of the subway scenes (Yurick believes that Hill had actually filmed the scene but then later cut it). Again, when you see this in the movie you will always remember the scene depicted in the book.

The book is certainly a deep resource of material for fans of the movie and also answers some of the questions most frequently asked by fans such as why the gang did not drive or get a lift home and why they did not just take their colours off. This latter point is contested at several times throughout the book by lower rank members of the gang who are worried that it makes them an easy target. Hector, who plays the equivalent of Swan, insisted that they keep their badges on to show their solidarity and because every cop or gang would come down on them regardless.

As evidenced by the afterword in the book, Yurick was never happy about how the movie turned out, despite it being a sell-out success, as it never reflected his story. Having read the book and seen the movie I can see why he felt that way. Yurick also openly criticises Roger Hill’s portrayal of Cyrus citing that he had no idea how gang members spoke. Yurick spent many hours spying on gangs from a hired beat-up panel van that he drilled holes in so he could see and overhear how real gangs in the city behaved so had good first hand experience as to how Cyrus would have perhaps spoke.

Yurick’s novel touches more on class and social attitudes in the late 60’s, the family culture and the relationships in and between street gangs, and the struggles of these youths trying to get by in the world. The Warriors by Sol Yurick is a more realistic portrayal of how the movie would have played out in real life. Yurick also frames his book with two quotes from Anabasis by Xenophon which is the book he read that gave him the inspiration for The Warriors. Interestingly, in the book, one of the members of the gang is reading a comic book version of Anabasis that ultimately made its way to the opening sequence of Walter Hill’s Director’s Cut edition of The Warriors that adds this all important framing.

In the afterword Yurick also muses that the movie everyone knows and loves was nearly never made as he was less than 24 hours away from signing the movie rights to another producer that wanted to create a movie version that almost exactly followed the events of the book. At the eleventh hour Lawrence Gordon offered a more lucrative deal so Yurick took it.

To sum up, the movie and the book are both great in their own right and that’s great because it wouldn’t be too much fun to read a book that’s essentially a transcript of the movie. If you view the book as a companion to the movie that fills in a lot of gaps and that provides a lot more background to the gang and its members, then I think you will almost certainly enjoy it. I did.

What do you guys make of this poster for The Warriors 2? Before you get…